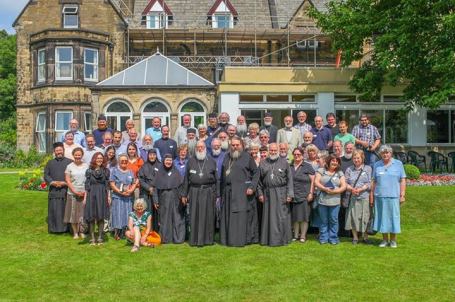 The presenters and attendees of the Orthodox Fellowship of St John the Baptist’s 2013 summer International Conference gathered on the lawn outside the main residence of the historic Hayes Conference Centre in Swanwick, Derbyshire for this group photo.

Two weeks ago, from the 12th-14th of July, a group of British and American Orthodox hierarchs, scholars, clergy and interested laity gathered on the beautiful grounds of the historic Hayes Conference Centre for a summer conference. Located in the idyllic country parish of Swanwick, Derbyshire in central England’s East Midlands, this magnificent estate was an ideal gathering place for one of the world’s preeminent annual Orthodox conferences. 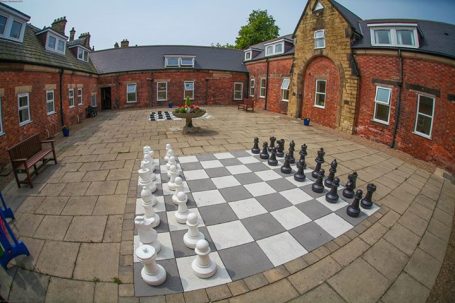 A central courtyard in one of the main buildings of the historic Hayes Conference Centre, sporting a fountain and a life-size chess board.

Looking toward the main house, built in the 1850s as a private gentry residence.

The Hayes Conference Centre was the site of this year’s Orthodox Fellowship of St John the Baptist annual summer conference. Triennially, this resident weekend conference becomes a major international gathering, and so it was this year, with the theme of the conference being “The Liturgy: the Entrance into the Kingdom”.

The Fellowship was founded in 1979, and works with the blessing of the pan-Orthodox Episcopal Assembly for the British Isles and Ireland. It enables English-speaking members of the many Orthodox Church Traditions in Britain and Ireland to come together and through prayer, discussion and mutual friendship, deepen their commitment to, and understanding of, the one Orthodox Christian faith. 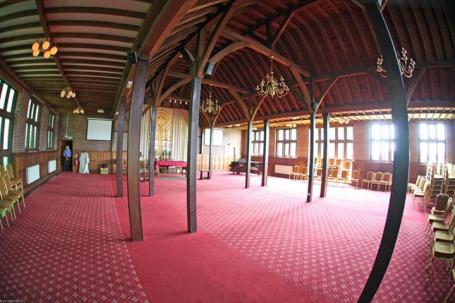 The conference hierarchs, clergy and laity gathered to celebrate the divine services in this beautiful hall.

Vespers in the chapel.

As this conference poster indicates, Metropolitan Jonah joined two noted British Orthodox lecturers in delivering keynote presentations, while His Excellency Metropolitan Kallistos (Ware) of Diokleia also participated in the gathering as a friend and guest of the Fellowship, in whose activities he has been closely involved since its 1979 inception.

Numerous Orthodox books were on sale at the conference. 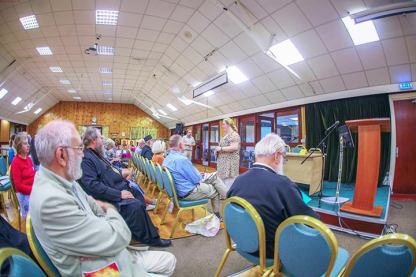 The conference speakers and attendees gathered in this beautifully lit central conference room. Metropolitan Kallistos sits to the right in the foreground, Metropolitan Jonah to the left, and Archimandrite Zacharias in the middle.

Presenting on Friday evening, 12 July on the subject of “the Liturgy as a means and a place where we exchange human life for Divine Life” was Archimandrite Fr. Zacharias (Zacharou), the spiritual father of the Patriarchal Stavropegial Monastery of St John the Baptist in Essex. Archimandrite Zacharias himself is the biographer and disciple of the Monastery’s founder, the venerable Elder Sophrony (Sakharov) of blessed memory; Elder Sophrony was the disciple and hagiographer of my patron saint, Silouan the Athonite.

Archimandrite Zacharias (Zacharou) of the Essex Patriarchal Stavropegial Monastery of St John the Baptist, under the omophorion of His All Holiness Patriarch Bartholomew of Constantinople and New Rome.

According to the conference programme, Metropolitan Jonah presented his lecture, titled “For Thou hast brought us up to heaven and endowed us with the Kingdom to come”, on Saturday morning, July 13. 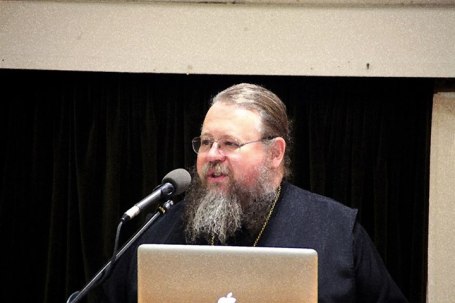 That afternoon Dr Andreas Andreopoulos, Reader in Orthodox Christianity and Programme Leader of the MTh degree in Orthodox Christian Studies at the University of Winchester, presented his topic, examining the theological depth and beauty of the words “For All and in All”. Dr Andreopoulos is the author of numerous articles and essays on Orthodox spirituality, and the author of several books, including This is My Beloved Son: The Transfiguration of Christ, with a foreword by Metropolitan Kallistos, and The Sign of the Cross, with a foreword by Khouria Frederica Mathewes-Green.

Early Sunday morning, the two hierarchs Metropolitans Jonah and Kallistos con-celebrated Matins and the Hierarchical Divine Liturgy together, with Metropolitan Jonah delivering the homily. The conference concluded at three in the afternoon the same day. 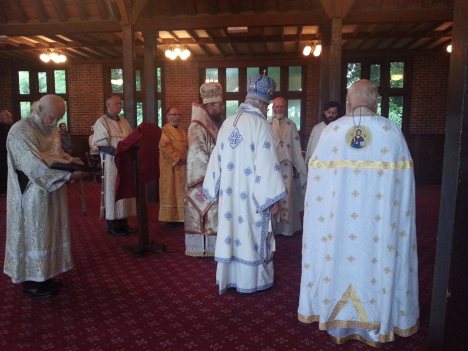 The two Metropolitans con-celebrating Divine Liturgy on the morning of Sunday, 14 July.

Metropolitan Jonah blesses the worshipers with the dikirion and trikirion (double and triple candlesticks signifying the two natures of Christ and the Holy Trinity).