“Do you consider yourself a racist?”

– Matthew Heimbach to an interviewer in the video clip here.

A man that is an heretic after the first and second admonition reject.

Matt Parrott, Matthew Heimbach‘s father-in-law and supporter, and an active blogger at their curiously named “Traditionalist Youth Network”, has responded here to my open letter to His Eminence Archbishop Demetrios. Orthodox Christian observers will note right away the outrageous comparison Parrott makes with an illustrated Simpsons caption, equating Heimbach’s fight for “white pride” and “white separatism” to St Athanasius’ fight against the Arian heresy of the fourth century. (Athanasius contra mundum — “Athanasius against the world”, is here altered to read “Heimbach contra mundum). This, and the deliberately fascist-like sign or logo of three yellow arrows pointing upwards, should immediately raise concern for any Orthodox Christian.

Here are my critiques of Parrott’s essay.

1) “The charge of “phyletism” against Mr. Heimbach is intellectually irresponsible, as the scope of this canon relates to relations within the Church, specifically relating to communion and jurisdiction.”

As Heimbach’s own priest enunciates, the canonical Church regards “white separatism” as a form of phyletism. Bishop Anthony of the Antiochian Orthodox Diocese of Toledo and the Midwest, who excommunicated Heimbach in 2014, also defended Heimbach’s excommunication on the grounds of phyletism.

2) “In fact, the heresy of phyletism is being committed by those who insist that Whites and Whites alone must renounce, reject, or be silent about their White identities in order to receive communion. What’s been done to Heimbach is a textbook case of phyletism, denying him communion due to a political rejection of his racial and ethnic identity, the White American identity. All he’s ever asked is for the Church to extend the same dignity and respect for his racial and ethnic identity that it has historically done an excellent job of extending to every other identity. Being anti-white is found nowhere Holy Tradition.”

This is an argument out of nothing. No one in the Church is saying you cannot be proud of your ancestry if you are white. Everyone can and should be proud of his or her ethnic history and heritage. I am not saying, nor have I ever said, that Heimbach and his followers “must renounce, reject, or be silent about their White identities”. What I have said, and will continue to say, is that Heimbach is entirely missing what being an Orthodox Christian is truly all about. I will develop this point later on below.

3) “It’s very unfashionable to be pro-white in the contemporary American society, and the epithet of choice for men who are pro-White is “White Supremacist.” I assume Ryan Hunter quite probably doesn’t know the difference between a White Advocate and a White Supremacist, and doesn’t care to make the distinction.”

I do know the distinction, but I think it’s an artificially created one. There is no real distinction between “White Separatism” and “White Supremacy” except among those who subscribe to such notions (a tiny minority of Orthodox believers). Joining the Orthodox Church, one’s first and foremost loyalty ought to be to the Church, not to the ethnic or political nation to which one belongs. My brothers and sisters in Christ, my fellow Orthodox believers, many of whom are dear friends, are of all ethnic races. There is, in Orthodoxy, ultimately only one real race, of which numerous Church prayers speak: the Orthodox Christian race. All other distinctions are decidedly secondary, but Heimbach’s activism — identifying a “White nation”– brings these ethnic differences to the forefront. This is where I disagree with him. Instead of celebrating the racial diversity of the Body of Christ, the Orthodox Church, Heimbach exults in his whiteness at the expense of his Orthodoxy. So dedicated is he to whiteness, as it were, that he remains outside of the canonical Church.

I believe Heimbach and his cohorts are wrong for espousing White Separatism, which, from all my conversations with White Separatists and my reading about them, I understand to be thinly veiled racism.

4) Parrott here is portraying Heimbach as a victim:

“It’s alarming that Matthew Heimbach has been cast into the outer darkness by the Church for arguably (with a bad argument, at that) being a phyletist without the usual opportunities to defend or explain himself, whileMichael Dukakis has gone on for decades confirming that slaughtering the unborn is consistent with the Orthodox faith without censure, excommunication, or piles of incendiary public letters being fired off. This double-standard has yet to be explained or defended.”

Parrott should take this up with the Orthodox Church hierarchs. I have spoken out repeatedly on the subject of abortion, which the Church rightfully condemns as murder of unborn innocents. If I were a priest or bishop, I would never give Dukakis communion, as his public pro-abortion position puts him outside the teachings of the Orthodox Church. Dukakis should not be communed as an Orthodox Christian, just as Nancy Pelosi and Joe Biden should not be communed as Roman Catholics due to their pro-abortion public political positions.

5) “The charge that Matthew Heimbach’s secular politics are outright heretical is hysterical and theologically indefensible. I’m sensitive to the fact that Orthodoxy–both within America and globally–has an obligation to demonstrate itself inclusive of every identity, but it also has an obligation to demonstrate itself above picking sides in secular politics.”

This is a clever bit of diversion. The only person “picking sides in secular politics” is Heimbach. While his positions are taken relative to secular politics (he’s on the far right), Matthew Heimbach’s politics are not secular by any means. He always appears in public wearing an Orthodox Christian cross, deliberately and consciously associating himself and his public image with Orthodox Christianity. At a public event he physically assaulted a man while carrying a three-bar Orthodox wooden cross. Note that this evidence of Heimbach assaulting the man while carrying the cross comes from a far-right neo-Nazi site, the Daily Stormer (as in SS Storm Troopers). The same article on the Daily Stormer, from April 29, 2015, asserts that “Matthew Heimbach will be now be producing a new podcast each week for Radio Stormer.” So he’s writing for a neo-Nazi website that deliberately uses fascist imagery, but we are supposed to believe he is not a racist, only a “white separatist”? Right… 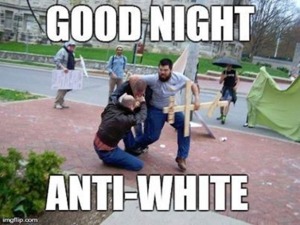 6) “Please carefully reflect on whether or not to participate in or support the witch hunt against this humble Orthodox Christian parishioner, Matthew Heimbach.”

Again, Parrott seeks, amusingly, to portray Heimbach as a victim of a “witch hunt against this humble Orthodox Christian parishioner”. Heimbach is no innocent victim, but a deliberate provocateur and member of the far right who openly sympathizers with Romanian fascist politician and anti-Semitic activist Corneliu Codreanu. As the same article in the Daily Stormer notes, Heimbach “sees Corneliu Codreanu as his main influence and takes much inspiration from him.” Codreanu publicly advocated for Romania’s alliance with Nazi Germany.

7) You can see the anti-Jewish comments below the article for yourself. Here is one particular one that stood out to me for its nauseating content:

Pressure to excommunicate Heimbach was completely political, and done under duress from groups like the Southern Poverty Law Center whose leadership believe in a “religion” that states the Virgin Mary was a prostitute and Jesus Christ was her illegitimate child. The goal here is to silence his political dissent by holding his religious beliefs hostage, can’t think of anything more insidious than that.

The fact that “Ryan Hunter” would side with Jews over another Orthodox Christian in pretty much every context shows that he’s in the wrong religion, he either doesn’t take it seriously or doesn’t understand what Orthodoxy is. He needs to go back to being an Evangelical or whatever he was before.

First off, “Eric”, I was a Roman Catholic before becoming Orthodox; I have never been an Evangelical in my life. Furthermore, as he is currently excommunicated from the Orthodox Church, Heimbach is not an Orthodox Christian. He remains outside the life and fellowship of the Church. After his excommunication from the Antiochian Orthodox Christian Archdiocese in 2014, Heimbach approached clergy in the Russian Orthodox Church Outside of Russia (ROCOR). The ROCOR clergy agreed to accept him only if he promised to stop his political activities and cease all talk of white separatism, etc. Heimbach initially promised this, but, according to a senior ROCOR priest I interviewed today, he immediately went back on his promise. This ROCOR priest told me that Heimbach lied to several ROCOR priests about his intentions, a grave offense in the Orthodox Church. Thus, Heimbach, by his own choice, remains outside the Church.

8) A series of concrete, specific actions taken by Orthodox hierarchs oppose Heimbach’s message. His Eminence Archibshop Iakovos, then Primate of the Greek Orthodox Archdiocese of America, chose in 1965 to march alongside Rev. Dr. Martin Luther King Jr at Selma. Earlier this year, His Eminence Archbishop Demetrios, current Primate of the Greek Orthodox Archdiocese, commemorated the event alongside US President Barack Obama. As the Archdiocese’s news letter reads:

The Greek Orthodox Church has always been an advocate for equality and continues to fight against racism, prejudice, discrimination and xenophobia with fervent love for God and all people. To commemorate the 50th Anniversary of the March on Selma, and to highlight the efforts of His Eminence Archbishop Iakovos of blessed memory to advance the Civil Rights Movement, the Holy Archdiocese has launched a website with a plethora of historical resources and announcements for upcoming events around this most important time in our nation’s history. Please visit:civilrights.goarch.org

In closing, Heimbach an Parrott’s self-asserted allegiance to “white separatism” obscures the very real theological and religious unity that exists between people of all races who share the same religion. Heimbach’s true brothers and sisters are not white people, but, when and if he repents, his true brothers and sisters will be his fellow Orthodox believers across the world, including many non-white people. His loyalty to “white separatism” constitutes a denigration of his real non-white brothers and sisters in Christ. By identifying first and foremost as white, and saying he advocates for “white separatism” (voluntary segregation from the non-white community) Heimbach is saying to all non-white Orthodox Christians (many of whom are friends of mine), “You’re not one of my people. You’re not my brother or sister.” Matt Parrott and Matthew Heimbach should read my friend Nathan Lawrence’s open letter to Heimbach. Nathan is biracial Orthodox Christian. He is a personal friend of mine, and he has been personally hurt by Heimbach’s white separatist and nationalist views.

There is nothing wrong with having pride in your heritage. I am proud to be of English, Scottish, and Irish descent. But what matters far more than your biological descent is your adopted sonship in Christ as a member of the Orthodox Church. Heimbach’s error comes in valuing his ethnic identity above his sonship in Christ, a sonship he shares with my friend Nathan and many other people who are not white. I would humbly invite Heimbach to do as Nathan has asked, and meet with him. Share beer, break bread together. Heimbach, insofar as he is Orthodox, is a brother in Christ. Insofar as he remains excommunicated, until he repents, he remains outside the Church. Heimbach has been admonished by clergy of two canonical Orthodox jurisdictions, and persists in his anathematized beliefs. His ongoing public actions — most recently calling suspected Charleston shooter Dylann Roof a “victim” — and the posts of his organization speak to his lack of repentance. Unless he repents, anathema sit.

17 thoughts on “Response to Matt Parrott, Matthew Heimbach’s father-in-law, who responded to my Open Letter to Archbishop Demetrios”