“Let us take refuge in the Lord, and ascend a little to the place where thoughts dry up, and stirrings vanish. Where memories fade away and the passions die, where human nature becomes serene, and is transformed as it stands in the other world.” 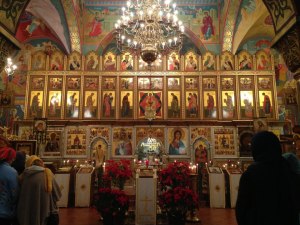 St John the Baptist Cathedral, the wonderful Washington, D.C. parish I attended from 2012-2013, and which I visit whenever I am in Washington. The cathedral is under the omphorion of His Eminence Metropolitan +Hilarion, First Hierarch of the Russian Church Abroad. It was founded in 1949 by St John the Wonderworker of Shanghai and San Francisco.

My name is Ryan Hunter. I am an Orthodox Christian writer, journalist, public speaker, and recent Stony Brook University graduate (BA, European History, 2016) and MA candidate in European History (2018). My future plans include pursuing a PhD in Russian, British, or Byzantine history, continuing to publish articles and write for various publications, and traveling to and speaking at academic conferences. I also seek to work in communications and parish ministry. Ultimately I wish to become a tenured university professor of history, but would also happily teach political theory, international relations, international politics, or world religions.

My principal academic research has been in the following areas:

Prior to coming to Stony Brook, I studied history, international relations, political philosophy, and politics at American University’s College of Arts and Sciences and School of Public Affairs in Washington DC. During the Spring 2012 term I studied Scottish and English medieval and early modern history at the University of Edinburgh.

I currently work as the graduate assistant at the Office of the Dean in the Stony Brook University College of Arts and Sciences. In the recent past, I have worked in communications for the University’s Office of the Bookstore Liaison and as a Conference Planner for the Office of Conferences and Special Events. I also work as a tutor and independent consultant.

I am a contributing writer at Ethika Politika, an online journal of ethics, politics, and religion. I also write as a contributing historian for the Marie Stuart Society and The Crown Chronicles (TCC), a popular London-based British monarchist blog affiliated with the prestigious British Monarchist Society and Foundation, with which I am also affiliated. You may find my articles for TCC here. I am also a contributor to the BMS Crown and Country magazine and Pravoslavie.ru, the historic Moscow Stretensky Monastery’s popular Orthodox content website. You may find my articles for Pravoslavie.ru here. Besides writing here on Orthodox topics in particular and Christian ones generally, I often write on historical issues, political theory, international royal history, and touch upon contemporary political and social events.

Some of my previous positions in Washington, DC include: serving as a Staff Writer at the Institute on Religion & Democracy (IRD) from August-December 2013, serving as a conference planning assistant to Anita McBride, former Chief of Staff to First Lady Laura Bush, in summer and fall 2012; working as an undergraduate research assistant with an American University professor of British history, for which I received a coveted financial award, in summer 2011; and as a research and planning assistant at Georgetown University’s Berkley Center for Religion, Peace and World Affairs, also in summer 2011.

Through American University, I served twice as a paid Teaching Assistant for a course on the history of international political thought and legal theory. I have completed two independent studies under the supervision of Dr Douglas Klusmeyer on the subject of the Thirty Years’ War and the Peace of Westphalia.

During the Fall 2012 semester I worked with Anita McBride, Executive in Residence at the AU School of Public Affairs’ Center for Congressional and Presidential Studies, as a Conference Planning Assistant with the AU Office of Development and Alumni Relations.

During Summer 2012 I worked as a research and social media coordinator and scheduling adviser with Jackie Norris at Points of Light Corporate Institute in Washington, D.C. I spent the previous summer as a paid AU undergraduate research assistant working with a British history professor, having received the prestigious $5,000 Matthias Undergraduate Research Award, and as a paid intern at Georgetown University’s interfaith Berkley Center for Religion, Peace and World Affairs.

As a member of the American University School of Public Affairs (SPA) Leadership Program from 2009-2012, I completed a sophomore social action project that connected dozens of DC college students, religious and community leaders, and young professionals in establishing the first DC-wide student interfaith project, the DC Student Interfaith Forum.

In Summer 2010 I completed an independent study examining the effect of the Thirty Years’ War and the Peace of Westphalia on the development of states in Europe. This work was in preparation for my work as a T.A. for the undergraduate course JLS 202 “History of International Thought and Law”, a position I held in fall 2010 and 2011.

I’m greatly interested in current events, both internationally and in the U.S. I love talking about international economics, politics and political theory, law and legal and constitutional theory, world religions, and international relations. History is, and has always been, my passion. I love discussions about current international events, economic and religious ideas, philosophy, news, et cetera.

I hope to engage with and teach students as a college professor, and continue to publish in different historical and theological fields.

I am also a sinner with the humble hope of renewal and transformation through faith in the Theanthropos, the God-Man Jesus Christ. I am an Orthodox Christian, and in this, I strive to remember the words of the Jesus Prayer- “Lord Jesus Christ, Son of God, have mercy on me, a sinner”.

In this I am nothing, but may, through Christ, transcend everything and become what St. Peter describes as a “partaker of the divine nature”. I hold fast to the words of St. Irenaeus, that, having received the life-changing blessing of the promise of eternal life through Christ, I may cooperate in synergy with the Holy Spirit to allow the grace of God to guide me in all that I do and transform my soul in unity with the divine energies. This is the unique challenge which the Orthodox Church offers her faithful, the challenge to surrender our will, the societal constructs of autonomy and extreme individualism, to allow the Holy Spirit to work in us and transform us in union with the divine energies. This is nothing less than the process of theosis, of divinization by which we may realize the fullness of our life in Christ.

On Sunday, December 4, 2011, the Feast of the Entrance of the Theotokos into the Temple (Julian calendar) I was received by chrismation into the Orthodox Church by His Beatitude Metropolitan Jonah, then primate of the Orthodox Church in America (OCA) at St. Nicholas Cathedral in Washington, D.C. I received the name Silouan after the beloved elder or staretz who spent the last decades of his life in ceaseless prayer on the Holy Mountain. In all humility, I consider having received this beautiful, challenging, and historic faith to be the most important and transforming event in my life. Entering into the fullness of the Orthodox Church, in my prayer life, in the Liturgy, in all that I am, is a blessing beyond compare. 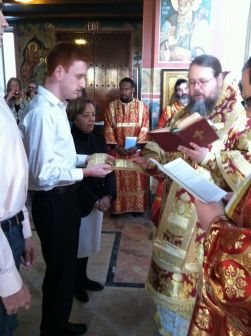 My goal in creating and updating this blog is to share with you various articles, podcasts, essays and lectures on the Orthodox Church throughout history and in the world today. I also will be sharing different musings, stories and moments from my life with you that relate to the Orthodox faith, especially with regard to the Liturgy, Great Lent and other fasts, matters of theological doctrine and theosis, and Church history. Please feel free to comment and share your thoughts as you read my entries, whether you are Orthodox, of another faith, or of no faith at all.

St. Nicholas Cathedral in Washington, D.C, the Orthodox Church in America (OCA)’s primatial cathedral, was my parish and spiritual home from November 2010 to August 2012. I love and miss the Cathedral, and I very much admire Fr. Valery, Deacon Blagoje, and so many others there. I do not know Metropolitan Tikhon, but I sincerely pray for his primatial ministry, wishing him well as Primate of the Orthodox Church in America (OCA). I encourage anyone who is able to visit St Nicholas to do so; the parishioners are delightful and warm-hearted people who love God, the choir chants beautifully, and the Cathedral is a historic Washington landmark with magnificent Russian iconography! 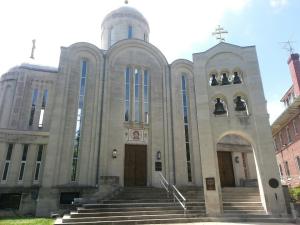 St Nicholas Cathedral, located at 3500 Massachusetts Avenue NW in Washington D.C, is a preserved architectural landmark, a beautiful temple to the Lord, and my first Orthodox spiritual home.

My spiritual father, now a ROCOR Metropolitan, serves most often at DC’s beautiful and historic St John the Baptist Cathedral, the Russian Orthodox (ROCOR) church founded by St John of Shanghai and San Francisco, “the Wonderworker” of blessed memory. This is where I now most often attend Liturgy and Vigil along with many friends, young and old. Metropolitan Jonah has built a wonderful teaching ministry and Bible study program there, and often serves at Liturgy at the invitation of the very kind Rector, Fr. Victor Potapov, with the blessing of His Eminence Metropolitan Hilarion, First Hierarch of the Russian Church Abroad. You are most welcome to visit both St John’s and St Nicholas! 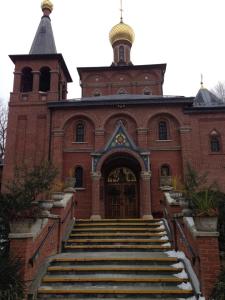 St John the Baptist Cathedral, founded in 1949 by the venerable St John the Wonderworker, Archbishop of Shanghai and San Francisco, is a beautiful and historic Russian Orthodox temple with a lively and welcoming parish. 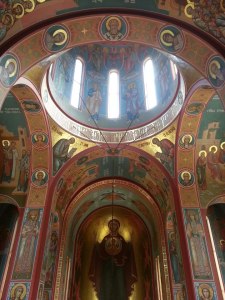 Gazing up at the St Nicholas Cathedral dome with the image of Christos Pantokrator, Christ as Almighty Ruler of the Universe. 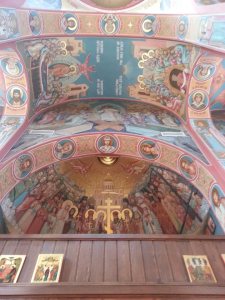 Choir gallery at St Nicholas Cathedral, Washington D.C. where I sang in the choir under the superb direction of choralist Veronica Gorodetskaia.

In addition to my current obligations, I am a contributing historian at The Crown Chronicles, a popular London-based British monarchist blog affiliated with the prestigious British Monarchist Society and Foundation, with which I am also affiliated. You may find my articles for TCC here. I am also a contributor to the BMS Crown and Country magazine and Pravoslavie.ru, the historic Moscow Stretensky Monastery’s popular website. You may find my articles for Pravoslavie.ru here. Thus, besides writing here on Orthodox topics in particular and Christian ones generally, I often write on historical issues, international royal history, and touch upon contemporary political and social events.

I have also worked as a staff writer, researcher and blogger at the Institute on Religion & Democracy (IRD). You may find my articles here at the IRD’s blog page, Juicy Ecumenism.

I worked with the IRD to publicize and critique the latest developments in different faith groups, especially the mainline U.S. Protestant denominations. I principally focused on global events and internal developments affecting the ministry, theology and ongoing witness of the Orthodox and Roman Catholic Churches. My research interests include the international response to the Arab Spring; the ongoing humanitarian crises in Syria and Egypt; Christian faith in American and European public life; analyzing U.S. political movements from an orthodox Christian perspective; and the intersection between U.S. federal administration policy, Christian theology and religious liberty.

Any errors, misquotations or other mistakes that appear on this site are my own, and, of course, I appreciate any readers alerting me to any such inconsistencies. 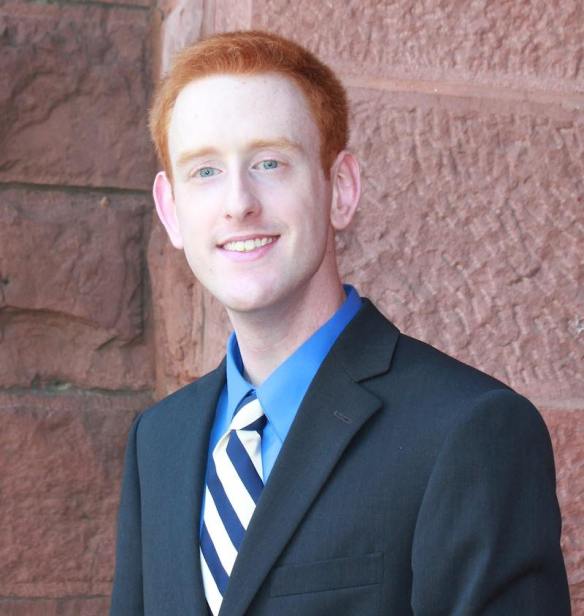 My professional photo for the Institute on Religion & Democracy, where I worked from August-December 2013 as a staff writer, researcher and blogger.

All my entries can be found chronologically by clicking above on “Posts”. Please feel free to search my site using any keywords that may help you find what you are looking to read.

Wherever you are, may the Lord always bless you and give you peace. 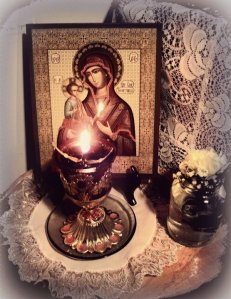 Lord Jesus Christ, Son of God, have mercy on me, a sinner!