Divine awe has nothing to do with trepidation – by which I mean, not the tremulousness induced by joy, but the trepidation induced by wrath or chastisement or the feeling of desertion by God.

On the contrary, divine awe is accompanied by a tremulous sense of jubilation arising from the prayer of fire that we offer when filled with awe.

This awe is not the fear provoked by wrath or punishment, but it is inspired by wisdom, and is also deserted as ‘the beginning of wisdom’ (Ps. 111:10).

Awe may be divided into three kinds, even though the fathers speak only of two: the awe of beginners, that of the perfect, and that provoked by wrath, which should properly be called trepidation, agitation or contrition.

St Gregory of Sinai (1260-1346) was a monk at St Catherine’s Monastery on Mt Sinai in Egypt who was instrumental in preserving the tradition of hesychia on Mount Athos and bringing it to Bulgaria. 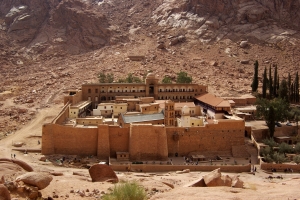 The Monastery of Saint Catherine, named in honor of the third century Great Martyr of Alexandria, is one of the holiest sites for Orthodox Christians. It is located at the foot of Mount Sinai, Egypt. On this site the Prophet and Hebrew patriarch Moses, traditionally viewed by Christians, Jews and Muslims as the author of the Pentateuch, received the first Ten Commandments from God. Erected by order of Byzantine Emperor Justinian I (r. 527-565), the monastery also encloses the Chapel of the Burning Bush.