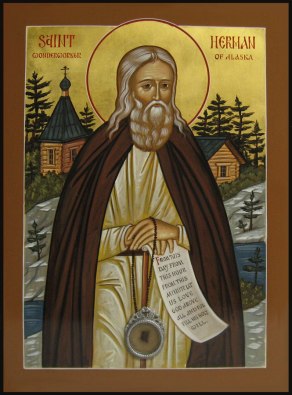 Saint Herman of Alaska (1756-1837) was one of the first Russian Orthodox missionaries to the New World, celebrating the first Orthodox Liturgy in the Americas on the Kodiak Archipelago’s Spruce Island in 1794. From 1808-1818 the saint lived there in a tiny hermitage. He is considered by Orthodox Christians to be the patron saint of the Americas.

“A true Christian is made by faith and love toward Christ. Our sins do not in the least hinder our Christianity, according to the word of the Savior Himself. He deigned to say: not the righteous have I come to call, but sinners to salvation; there is more joy in heaven over one who repents than over ninety righteous ones. Likewise concerning the sinful woman who touched His feet, He deigned to say to the Pharisee Simon: to one who has love, a great debt is forgiven, but from one who has no love, even a small debt will be demanded. From these judgments a Christian should bring himself to hope and joy, and not in the least accept an inflicted despair. Here one needs the shield of faith.”

—Letters of St. Herman of Alaska