“We should view the non-Orthodox as people to whom Orthodoxy has not yet been revealed, as people who are potentially Orthodox (if only we ourselves would give them a better example!). There is no reason why we cannot call them Christians and be on good terms with them, recognize that we have at least our faith in Christ in common, and live in peace especially with our own families. St. Innocent’s attitude to the Roman Catholics in California is a good example for us. A harsh, polemical attitude is called for only when the non-Orthodox are trying to take away our flocks or change our teaching.”
– Fr. Seraphim Rose (1934-82)

“God is love, and therefore the preaching of His word must always proceed from love. Then both preacher and listener will profit. But if you do nothing but condemn, the soul of the people will not heed you, and no good will come of it.”
– St Silouan the Athonite (1866-1938) 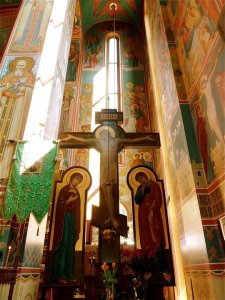 This evening, I received an update that someone had commented on one of my recent blog pieces. The person, using the name “Orthodoxy or Death”, commented the following:

“Another friend who attended the banquet described to me his shock to hear Fr. Leonid praise Metropolitan Tikhon in his introduction with these words, again a thinly veiled attack on Metropolitan Jonah: ‘This one is no Lone Ranger!’ I respect Father Leonid for his many years of engagement with various ecumenical bodies, such as the World Council of Churches, but I find it difficult to view him as a man of integrity given that he engaged in such derisive remarks about a former Primate of his whom he seems to delight in insulting, regarding as almost an enemy. This just doesn’t seem to me like a Christian way of thinking — or speaking — especially from someone with so many years of active service in the Church.”

Why would you respect anyone for “engagement with various ecumenical bodes, such as the World Council of Churches”? Has he upon every appearance and interaction with that body told it repeatedly that they are all in schism and heresy and that Orthodoxy alone is the Church, and no real Christianity exists outside of us, and that Orthodox shouldn’t even be members of such false “ecumenical” groups?

Here is my reply: