This is a wonderful article from Orthodox History describing then-U.S. Minister to Russia John Quincy Adams’ reaction to an Orthodox baptism which took place in his Saint Petersburg parlour in January 1811. The timing of this event is also remarkable given its close proximity to French Emperor Napoleon I’s invasion of Russia the following year.
As was typical of Adams, his account of the baptism ceremony is methodical in detail. He also evidently heartily approved of ordinary Russians’ devotion to the ascetic fasts, which he believed would be medically, physically and spiritually beneficial for Americans to imitate (if not for the theological reasons which he does not seem to have understood or considered important).
Adams was noticeably biased in his perception that Russians’ physical expressions of piety in church revealed what he considered to be their “superstitious” nature, but this is not surprising given his Unitarian upbringing (services completely lacking religious images, iconography, or physical bows or prostrations done in reverence to God or veneration of the holiness of the saints). 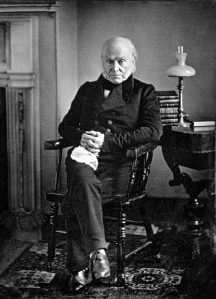 John Quincy Adams (1767-1848) was one of the most distinguished public servants,diplomats and political and intellectual figures in American history. The eldest son of the second President John Adams (1735-1826, President 1797-1801) and First Lady Abigail Adams (1744-1817), Quincy Adams served as the sixth U.S. President from 1825-1829. Prior to assuming the Presidency, Adams served in the second Washington administration as U.S. Minister to the Netherlands (1794-97), a role filled by his father during the Revolutionary War, and during his father’s term as President the younger Adams served as U.S. Minister to Prussia (1797-1801). Following his father’s losing 1800 bid to Thomas Jefferson for reelection, John Quincy Adams represented Massachusetts in the U.S. Senate from 1803-1808. During James Madison’s presidency, Adams served as the first accredited U.S. Minister to Russia (1809-1814), reporting on Napoleon’s doomed invasion. His charming British-born wife Louisa Catherine Adams became a major diplomatic asset to the United States as a favorite of Tsar Alexander I. After his commission ended, Adams again followed in his father’s footsteps as U.S Minister to the British Court of St James (1814-17), where George III was still king (in name) as he had been since 1760. In the Monroe administration, Adams worked closely with the fifth President as his Secretary of State. Following Adams’ own defeat to Andrew Jackson for reelection in 1828, he served from 1831 until his death in the House of Representatives in February 1848 as a committed opponent of states’ claims to nullification and the expansion of slavery.