“Hearken, hearken to what will happen in the latter days of the world! There will be great wars; unjust laws will be enacted; the Church will be despoiled of her property; people will read and write a great deal; but charity and humility will be laughed to scorn, and the common people will believe in false ideas.”
-St. Columba of Iona (521-597) 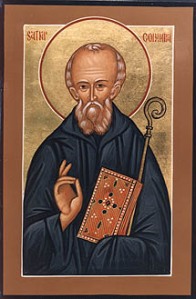 Holy evangelist Columba, pray to God for us that He might save us!

Saint Columba of Iona, known as Colum Cille in Old Irish (“dove of the Church”) and Calum Cille to the Scots Gaelic tribes, served as one of the “Twelve Apostles of Ireland” (Saint Patrick being one of the more well known). He evangelized to the Celtic Irish tribes as well as the Picts of present-day Scotland. He frequently prophesied of future disasters and cataclysmic events.