Tomorrow, June 11 (which is May 29 on the Julian calendar) we remember the Fall of Constantinople to the forces of the Ottoman Sultan Mehmed II Fetih (“the Conqueror”) on May 29 in 1453.

One of the most traumatic events in Christian history with lasting repercussions to this day for Greek-speaking people in particular, Constantinople’s fall to a multi-confessional, multi-ethnic army led by Sunni Muslim Turks was also one of the pivotal turning points in Western and Ottoman history.

While the city had declined in population, power and prestige to become a shadow of its former self, and was in fact little more than a series of loosely connected villages huddled behind the ancient Theodosian walls when Mehmed’s forces breached them, its fall came like the crashing of a giant in the Christian consciousness.

With the death of the Emperor Constantine XI on the walls of the city, the Empire whose citizens had simply called themselves ‘Romans’, whose official name was Βασιλεία Ῥωμαίων, the Roman Empire, or Ῥωμανία, ‘Romania’, came to an end after 1100 years. When one thinks of the city’s repeated attacks and sieges by the Huns, Persians, Arabs, then-pagan Vikings and Russians, Bulgars, Crusaders, Seljuk Turks, and finally the Ottomans, it is remarkable that, until its first sack by the Crusaders in 1204, Constantinople presided over an empire which achieved an extraordinary integration of three main influences.

Byzantium synthesized an extraordinary ancient cultural and philosophical legacy from classical Greece and the Hellenic kingdoms with that of Roman law, political theory and imperial government structure, preserving thousands of classical and legal texts which would have likely been lost in the West. Crucially, Constantinople’s endurance of many centuries of external pressure, including intermittent hostility with the northern Italian mercantile states after 1204, especially Venice and Genoa, served to prevent major Muslim expansion into Europe..

From an Orthodox perspective, Constantinople’s stature as the patriarchate second in honor as the New Rome after the Old caused it to become the center of what came to be called Byzantine, or Greek, Orthodox Christianity with a vast contribution in liturgical tradition, homiletics, theology, and phronema. The fall of the city profoundly shocked all of Christendom, especially Rome, as the ancient patriarchate which had been second in honor in the Christian oikoumene was now transformed into the capital of the most powerful Muslim empire. The Ottoman Turks finally gained the prize which they had been encircling for over a century since they conquered most of Anatolia and expanded behind Constantinople into Thrace and the Balkans. Unsurprisingly, historians traditionally date the end of the Middle Ages to the fall of Byzantium, from which they also mark the official opening of the Renaissance and the early modern era as Byzantine refugees poured into Italy.

This video here is a profound and beautiful example of the Roman Church’s horror over the fall of the city which had been the Byzantine capital and heir to the Roman Empire for over a millennium. At Pope Nicholas V’s urging, the brilliant Franco-Flemish choralist Guillaume Dufay (1397-1474), leading composer in the Burgundian School, composed this magnificent early Renaissance motet in 1454. Pope Nicholas invited many Greek refugees from Constantinople to Rome, where he hoped to add their intellectual luster and their accumulated theological, historical, literary and artistic works to the splendor of Old Rome. Unsuccessful in his attempts to convince the squabbling northern Italian city-states to unite in a common cause to retake Constantinople from the Ottomans, Nicholas V died in 1455, acknowledging that his papacy would be forever marred in history as that during which Nova Roma, the Queen City of Christendom, fell. 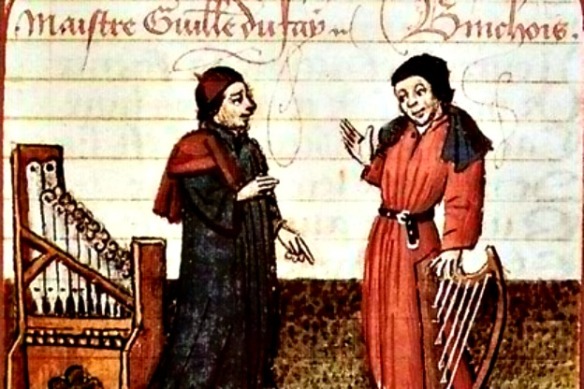 Dufay modeled his ethereal dirge, “Lamentatio sanctae matris ecclesiae Constantinopolitanae” (the Lament of the Holy Mother Church of Constantinople) from a part of the Book of Lamentations on the fall of Jerusalem to the Babylonians. Here are the song’s lyrics in Middle French, with translation into English below:

Translated into English:
“O most merciful fount of all hope,
Father of the son whose weeping mother I am:
I come to complain before your sovereign court,
about your power and about human nature,
which have allowed such grievous harm
to be done to my son, who has honored me so much.

For that I am bereft of all good and joy,
without anyone alive to hear my laments.
To you, the only God, I submit my complaints,
about the grievous torment and sorrowful outrage,
which I see the most beautiful of men suffer
without any comfort for the whole human race.”

Disclaimer: I highly encourage you to disregard the text which accompanies this video. While some of it is accurate, a good deal of it is absurdly polemical. I chose this video of Dufay’s “Lamentatio” in preference to the other three I found for its inclusions of a series of famous portraits and paintings of the siege and fall of the City. In no ways do I endorse the description which “Petrus Josephus”, the anonymous poster of this otherwise beautiful YouTube video, uses to apply to all Muslims in his text. “Petrus” refers to the Ottomans as “heathen Turks” and refers to all Muslims as “abominable mohammedans”. This is an antiquated and inaccurate term rooted in an initially widespread misunderstanding of Islamic theology (the word “mohammedan” itself implies a worship of Muhammad which Muslims categorically reject). Later in his video, “Petrus” refers to “the virus of Islam” as an “onslaught” which “has never been stopped” in “Europe and her colonies”. Besides the obvious reality that most of Europe is not Muslim, “Petrus”, an ultra-traditionalist Roman Catholic whose “About” page contains references to the schismatic Society of Saint Pius X (SSPX), would do well to read more about the resurgence of Orthodox Christianity in Eastern Europe and its growth in Germany, France and Britain.

Please find the other two YouTube videos I found of Dufay’s “Lamentatio” here, performed by the renowned Hilliard Ensemble, a British male quartet specializing in Medieval and Renaissance music, and here.